I’ll never be able to figure out if that girl in the intro is saying better or badder. Someone said it’s supposed to be badder, but it clearly sounds like better, so I’m just lost. (maybe it was on purpose to mess with our minds and get us to relate to how they’re feeling in the song)

Anyways, Dynamic Duo finally made its return after a year and half and Lucky Numbers is certainly the BAAAM we’ve been waiting.

When I listen to a new song, I usually watch the music video first,  listen to the song by itself, and then read the lyrics together. So I had such a moment when I realized that the BAAAM in the song is not BAAAM the sound effect.

And flower snake is a reference to a cunning woman who tricks a man to get what she wants. For Dynamic Duo, they take out the flower, so it’s just snake, but at the same time, the song is talking about a woman, who is super good at the game of push and pull, and it’s driving the guy in question absolutely crazy. Also fitting, because the girl hit him so hard in the head that he’s completely crazy despite knowing that she’s completely toying with his mind.

The lyrics are so witty and clever that I burst out laughing just reading them. You can actually hear the desperation in Gaeko and Choiza’s voices as they rap things like,

“You always leave after I pay for the coffee or drinks.
You’re bat/bad girl, the character of controversy.
You always torture my heart with the whip called hope,” 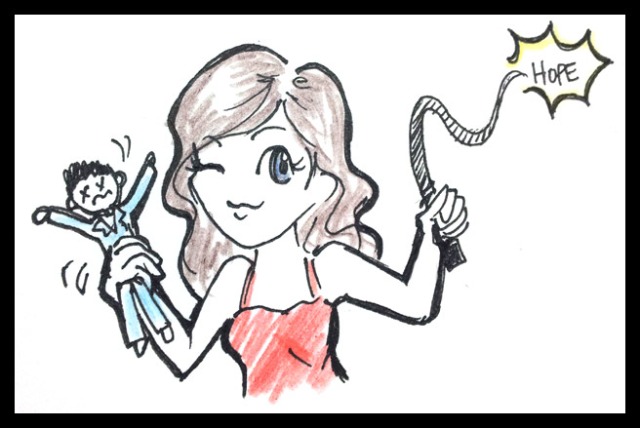 “Like a light dumbbell, you pick me up and put me down.
Your vague attitude confuses me.
Where are you? I reserved movie tickets!”

(Oh how I love the frustration in the lyrics)

They’re so smooth in their actions but the lyrics only talk about how sprung they are.

I was actually talking with a friend about how lately the roles have changed in Kpop and it’s very interesting.

The men have become more emotional (B.A.P, Dynamic Duo) while the women have become overzealous to get the relationship going (HelloVenus, Girls’ Day).  It’s nice to know girls are taking the lead (although it’s not the way I would like to see them – but that’s a blog post for another day) and the men are getting more honest about their feelings instead of having the macho image all the time.

I haven’t heard the entire album in depth, but from the few songs I listened to, there’s a reason why all 13 tracks are taking over the music charts, and when I mean taking over, I mean the songs actually rank from 1 to 13 on music charts.

On another note, I love how classy Dynamic Duo looks in the music video. Gaeko and Choiza prove that you don’t need bandanas, chains, baggy pants, ie) stereotypical ‘hip-hop’ clothes, to be amazing hip-hop artists. They look so dashing in suits and I love that.